skip to main | skip to sidebar

Whole month of Holiday in Sabah!

My whole month of unpaid leave, I spend my holiday at home. Nenad came with me for a few days... He always wanted to know how Kaamatan feels like .. so I brought him back to Sabah for the 2nd time. We arrived a week before kaamatan, and oh ! I have forgotten the feeling of kaamatan already! My brother opened a 3/10 stall (gerai numbur 7) in Hongkod Koisaan where all the action was. 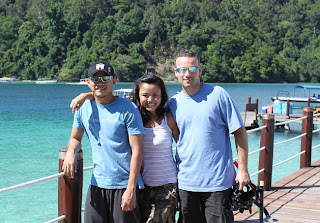 In the midst of the celebration I get to bring Nenad with yeye to go to the Island for some relaxing time on the beach ... :) some relaxing time it was ... the only time we actually get to be calm and in peaceful mode again. The sun and the water compliments us well ...:) 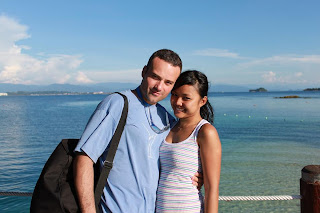 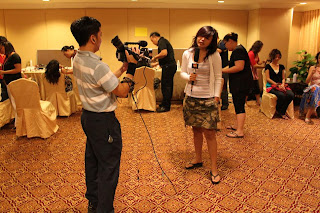 After that relaxing hours on the beach I was outof no where became an interviewer for the Unduk Ngadau Contestant when they were getting ready for the Gala Night Dinner in the Hotel Ball room. My Friend David insisted for me to do it for him and I just cant say NO, so I did.
For that few days , we've been hanging around in the stall ... and I became the "tukang masak" ndak rasmi for the stall, on the BIG day itself, I did become the tukang masak hahhaha. But I had time as well to bring Nenad to go around the area although the poor guy was feeling so hot and sweaty hahahha .. but he enjoyed it. He was even invited to sit with all the VIPs in the Lotud House to share their meals .... He really made an impression on everybody wherever he goes ... especially when he sang "sayang kinabalu" and wow everybody at Felix Agus and Othoe SuriaFm tent. 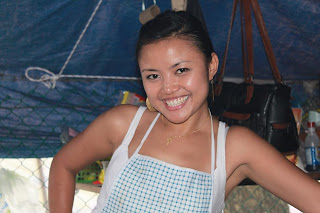 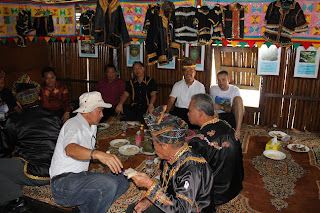 It was a hectic and fun week ... but going back on the 1st day I came to Sabah .. and I was craving for Hinata the traditional dish from my tribe.... and without wasting time ... I started to make some Hinata myself .. right after I cut the grass in my mum's yard ...... I thought I already lost the grip ... but I still have it baby ! and it feels good to go back to basic ...although my mum was screaming at me in the phone ....when my aunt told her that I was doing that hahaha ... 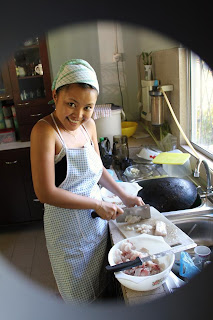 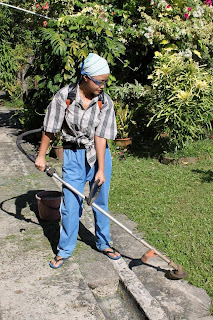 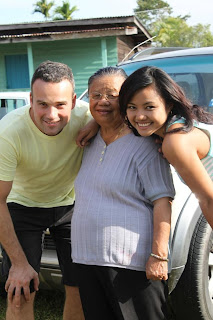 And then after kaamatan .... We went back to Tambunan to meet the family there ... :) My grandma was so happy to see everyone was there to see and be with her. And she was pleased to see Nenad again for the second time.
We had a nice little dinner prepared by my mum and my aunt ... and Nenad and uncle Bill( my American uncle) my aunt Flora's husband was preparing some of their specialties ..... Bread and Meat Loaf.. We had dinner of mixture of Sabahan and European and Western style .. it was weird ... but no doubt it was so yummy.. 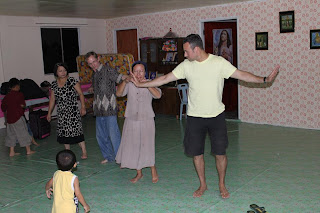 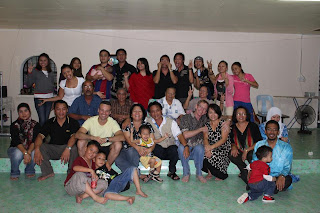 We danced sumazau and Nenad and Uncle Bill had their chance to show their ability to dance the Sumazau with help from Sis. Judith.At the end of the night.... we took a picture of all of us together. It was a night definitely to remember forever... :)

The next day we went back to KK to celebrate Kaamatan. It was a fun but tiring event for me and everybody else ... :) so that goes back to the 1st session of this blog ... :) sorry about that ....
Other than Kaamatan we had the chance to visit the Linangkit Cultural Village in Tuaran.... And Nenad took a great picture of me acting like i was cooking using the old school cooking place... :) .. And it was a nice feeling to introduce my culture to Nenad as I was with his Culture .... 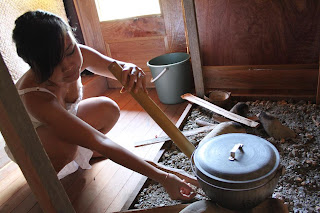 And thats some of the trips details I had with Nenad ... Well sadly Nenad had to leave and go back to Dubai ... and Leave me in Sabah to continue the journey :(... It was sad.. but I manages to pull myself together and managed to do something productive ... like having my Driving License sort out finally!!!!!!!! and I got my license in less than 10 days ... :) and was driving around ever since hahhahah .... 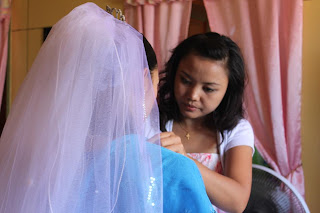 We went back to Tambunan to attend the wedding of my aunt ...I became a "Mak andam terjun" on my aunts big day .... Its just that she didnt have any proper make up artist for the big day ... so I sincerely volenteered to help out with whatever skills I had .... :) and thank God it worked out! yay
Stayed a weekend there with all of the family... feels good to have everybody around.
Well so far thats it guys ... sorry if I dont really tell the stories nice enough... its just that its almost 3am here and I am getting a little blocked with inspiration ... Anyways ... I hope this is enough and happy reading!
Posted by Petronella Suan at 13:55

tell me about it ahhahah :O

t's such a great site. fabulous, quite interesting!!!

I love thisispetronella.blogspot.com! Here I always find a lot of helpful information for myself. Thanks you for your work.
Webmaster of http://loveepicentre.com and http://movieszone.eu
Best regards

Ηere is my wеb ρage :: hcg and weight loss

Get The girl a Rolex watch Nowadays
Lady Perpetual
The feminine sort of a Rolex watch GMT Get better at will be the GMT Expert A couple of. The following pendant manufactured from white gold or platinum is about together with sapphires and also diamond jewelry along with the bevel is usually rotatable and place together with sapphires, jewels in addition to rubies. The face area of the watch is usually black and exhibits some time plus time.
Day time Time frame A couple of
GMT Master II

You need to use the TinyUmbrella software to save lots of
the SHSH of one's iPhone. Beings with abilities are premium
within this structure. Formerly there were different causes for
jailbreaking an iPhone.

My brother recommended I might like this blog. He was entirely right.
This post actually made my day. You cann't imagine simply how much time I had spent
for this information! Thanks!

Hello There. I discovered your blog the use of msn. That is a really well written article.
I'll make sure to bookmark it and return to learn more of your useful information. Thank you for the post.

constantly i used to read smaller content which also clear their motive, and
that is also happening with this paragraph which I am
reading here.

My developer is trying to persuade me to move to .net from PHP.

I have always disliked the idea because of the costs. But he's tryiong none the less.
I've been using Movable-type on several
websites for about a year and am concerned about switching to another platform.
I have heard very good things about blogengine.net.
Is there a way I can import all my wordpress posts into it?
Any kind of help would be greatly appreciated!

Welcome to my world